So I found my copy of Trans-Sister Radio and have been re-reading it. For those who do not know the book, it made a pretty good splash in Milwaukee when it was published in 2000, smack dab in the middle of my growing realization at age 12 that I might not be a boy (other highlights from my reading list at the time was As Nature Made Him, telling the true story of a boy whose circumcision went terribly wrong, and the doctors decided to just make him grow up as a girl, with perhaps obvious results in hindsight).

Trans-Sister Radio tells the fictional story of a pre-operative lesbian transwoman (Dana), the straight ciswoman (Allie) she fell in love with just prior to starting transition, Allie's daughter and ex-husband, and their small community in Vermont during Dana's coming out, transition, and GCS.

And while, my gods, it is a hard read due to the massive change in language and transition science in the almost 20 years since it was written, much of Dana's experience is a valid one.

But I want to be clear. There are as many stories about being transgender as there are transgender people. And there are kind of a surprising number of similarities between Dana's story and mine. But it is physically painful for me to read some of her story, because I have not. Did not. Ever hate myself or my body. Especially not to the point of alcohol, drugs, eating disorders, and suicidal ideation! And I want to be here for anyone out there who does. It gets better.

There are other stories. <3

One year on hormones today.

TransUnion just confirmed that they have updated my name on their credit report. Just waiting for Experian and Equifax.

Also what the fuck Chase, mailed forms are the only way to change an account? And you failed to mail me the form twice now?

Did some work, had some meetings, got a headache from the office remodeling construction.

Drive to i3Detroit, clocked back in and did some more work and some mounting and soldering for a door controller. Clocked back out.

Dad wanted the THX 1138 logo on vinyl on the back of his new boat (the one we just broke). Found a decent resolution movie poster, traced it in Inkscape, cut and weeded it.

Fixed an issue with a friend's Linux install. Dropped off the machine at her place. Drove home. Found a new driver's license in the mailbox.

Have a cat! Time for sleep.

Bigots suck. One asshat at my mortgage company in particular that I seem to have gotten around by being That Customer (TM) enough to be escalated four levels to someone who immediately fixed my issue (and hopefully fired the asshat for actively lying to customers about legal matters).

But I did have a nice encounter today though. Sitting in line at the CBP/NEXUS office for name/gender marker change, there was a lovely family all getting theirs.

At one point, the youngest (approximately 8, based on the year of birth she gave in her interview right in front of me) turns to her mom and little-kid-whispers "that lady over there has really pretty hair, can I get that [the last 4" or so of my hair is dyed blue] on mine?"

I passed the little kid test!

The FCC was super easy to update. Upload proof of ID (I have been using my passport because my DL is still on the mail) and the name change order, and fill out an administrative update application. Took about two weeks. Updating my FRN was even easier; effectively just a profile update on ULS. 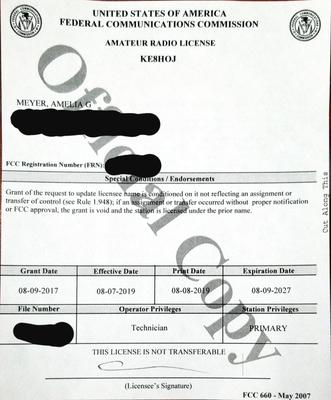 Went sailing with my dad on Lake St. Claire all day yesterday. That helped a lot. Still need to get a therapist, but much better headspace now.

Also, making lots of progress on my name change. Like 46% done. And 75% of the remaining are started.

Had the very first panic attack of my life tonight. That fucking sucked. Sleep now, probably more posting about it later so I can work through it while I hunt for a therapist.